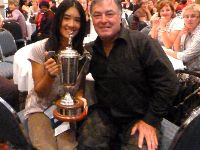 and South Western players figuring keenly amongst the hierarchy. Approx 400 women golfers from all country districts in Queensland competed in the event

Tops of them all was young Samantha Foley one of our junior players from Inglewood, now a Warwick member. She took out both the Championship and Silver net on a count back from local players. A first round score of 79 was followed by a superb par round of 72 on a very difficult course to give Samantha the title.

Other Downs and South Western players gave good showings to make the Top 10 in various Divisions.

Margaret Richards from the City Golf Club was the best of the Silver Division players with a 9th in both the gross and net events, edging out many local low markers. Margaret is one of the District's consistent Meg Nunn representatives,

Another player from City, Kerri Wheeler showed them how it was done in Bronze 1 Division 1 by finishing 5th in the gross event and 9Th in the net event. Kerri also combined with Nanette Ford from the Toowoomba Golf Club to finish 6th in the Foursomes Division 2 gross event.

Other achievements were all from the City Golf Club. Noela Hazzard came 6th in Bronze 1 Division 2 net event, Del Webster was 10th in the Bronze 2 Stableford event

Congratulations to all players from associated clubs in the Downs and South Western District, who travelled to Yeppoon to compete at these Championships-