The concept of this event is to provide a match play learning experience for our junior girls. Each junior girl is accompanied by a senior player who, although playing her own match, provides support and encouragement for the junior and assists with rules and etiquette when required.  The competition is a handicap match play with games to finish at 18th hole

The competition has two trophies: one for the junior golfers and one for the senior players, and it has been running for the past 25 years.

This event is played over two days, and every player is guaranteed 18 holes each day, and is played in three divisions - A Grade 0 to 19 handicap; B Grade 20 to 29 handicap; and C Grade 30 to 45 handicap.

Entry Form available on the Website, under the Events Tab.

This 36 hole gross event is open to any female player who holds a GA handicap.

A 36 hole gross and net event is also run in conjunction, with winners in all three grades, and also daily.

The first day of the carnival is an 18 hole foursome event, with winners in both gross and net.

This is always played in August and the district Annual General Meeting is held at the same time at the host club.

The Entry Form will be available on our Website under the Events Tab by end of May.

This is an aggregate stableford event, which is played at the beginning of each year by committee members of D&SW affiliated clubs.

The teams, where possible, should comprise President, Captain and Secretary.  Gender is women only.   Clubs may substitute lady committee members or lady members if their officials are not available on the day. D&SWDLGA will be represented by the President, Secretary and Handicap Manager, If these officials are required to represent their Club then the District will be represented by other delegates.

The winners will be the club team with the highest aggregate stableford score for the 3 cards.

The entry form will also be available on the Website, under the Events tab . 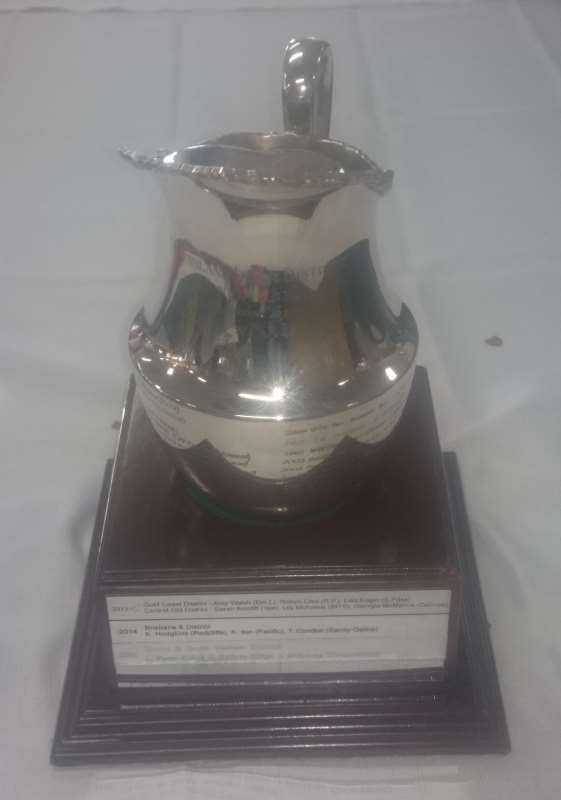 A beautiful antique silver jug was given by Gail Corry and Pam Langford (nee Tait) as the trophy, to encourage experience in match play. These two ladies had won for Queensland the first Interstate Junior teams title in 1961, when it was introduced as part of the Australian Amateur Championships, and they saw the benefit of learning match play.

Gail Corry's original club was Bargara, where she is now a Life Member. She representedQueensland along with Pam Langford for many years in the Gladys Hay Interstate matches. Gail
won the Australian Amateur Championship in 1965 and 1966.

Pam is a life long member of Indooroopilly Golf Club, and has contributed much as a player, captain, and administrator of the Queensland Ladies Golf Union (QLGU) and was President in the first year under its new name Women's Golf Queensland (WGQ).

In 1984, Juniors were players under 21 years of age. When the junior age limit was lowered to under 18 years in 1993, the handicap limit for participation in the Junior Jug was extended from 18 to 21. Initially handicap match play used 3/4 the difference between the players' handicaps; later full difference in handicap was introduced for giving and receiving strokes as per the match index. Many changes to handicapping have been ongoing.

Over the years, other changes in Junior Jug play have included increasing team numbers from two to three, and foursomes match play was included initially. Many fine players have started their representative golf careers in Junior Jug competition. The inaugural 1984 winners Alison Munt and Karen Pearce of Downs and South-Western District, went on to qualify as travelling professionals. Karrie Webb represented North Queensland District as a teenager. We all know she achieved the status of World number 1 for many months and will represent Australia at the Rio Olympics.

This Inter-District Match Play Tournament has evolved to include all seven Golfing Districts throughout the state coming together to play for the Meg Nunn Salver. The venue for the event rotates through the seven districts of Far North Qld, North Qld, Central Qld, Sunshine Coast Burnett, Brisbane & District, Gold Coast District and our own Downs & South Western District.

This is an open event, and nominations are sent out to all clubs in South East Queensland. Players must  hold a GA handicap and be 50 years or older

Postal Pennants was set up to encourage fellowship and rivallry between clubs within a nominated zone, as these clubs could not attend a monthly pennant competition due to travel restrictions. Clubs are asked to forward onto the coordinator the best scores for the month for 1 to 3 players - commencing in May to September these must be received in the first week of the following month. Each month scores are tallied and a winning club nominated after the end of September.

All  clubs not participating in Zone Pennants are eligible to enter Postal Pennants. The winning club of each zone is presented with a Pennant at the District Championships in the following year.

Zone 4 clubs who are not participating in zone pennants and are also encouraged to enter. These clubs are Condamine, Inglestone, Taroom, Tara, Miles, Wandoan.

Mrs Joan White is the coordinator and can be contacted on 4653 1179 for further information.